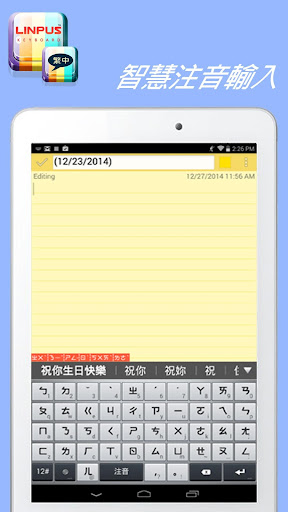 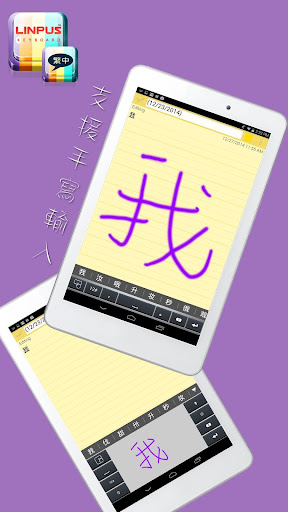 Linpus Traditional Chinese Keyboard can predict your next word faster and more accurately than other keyboards because of its huge dictionary of words and Linpus’ exhaustive testing of word patterns. In addition, when you start to type the last part of Linpus’ work kicks in as Linpus Keyboard then starts to learn from the words you personally use to make that prediction even more accurate.

But Linpus Traditional Chinese keyboard is not just the most accurate it is also the most fun, most complete in terms of input methods, and customizable. It has its own full featured handwriting solution, a gesture typing solution; T9, fuzzy, handwriting, Zhuyin, Sucheng and Canjie input; re-size keyboard options, and many different themes to choose from.

Linpus Traditional Chinese Keyboard has been massively improved and updated in this edition. Next word prediction is now more accurate and faster and the handwriting engine is new. In addition, this version has the following charging features, I hope you can support the Linpus input method development team so that we can make the best input method.

**Backup and Restore function: It can back up common words in Chinese and English after wisdom memory;

**Trace input (English, Zhuyin): Quickly enter by sliding your finger on the keyboard.
A full list of features is below:

An amazingly accurate prediction that learns and gets better the more you type
Innovative gesture typing solution
New improved handwriting engine
More ways to select sub-menu items – As well as long press can now swipe on a key
One tap to select and send typed words to prediction on bar for editing
Splittable keyboard
Mixed English and Chinese input in one keyboard
Most extensive set of input methods for both Simplified and Traditional Chinese: T9, fuzzy, handwriting, Zhuyin, Sucheng and Cangjie
Edit the words memorized in your dictionary
Pannable prediction bar
Emotion symbol support
Arrow keys (cursor up and down and move around)
Improved Zhuyin and Pinyin spelling modification
Multiple skins and themes
Resize keyboard option
Long press to get comma, period, question mark and exclamation mark on first screen
Exhaustive list of colloquial words
Easy to use 9 square grid digital box instead of symbol layout for easy word editing
Fix dialog problem cause crash on Android 9.0 devices.